As one of the three major religions in the world, Buddhism has a wide range of popularization and far-reaching influence. It is recorded in the Scriptures that when the Buddha was alive, he went to the gods of heaven to preach Dharma. The world has not seen the Buddha for a long time, so he yearns for the Buddha, but creates the idea of Buddha statue. Thus, there are Buddha statues. Buddha’s appearance is for the sake that people can’t see the Buddha himself. Seeing the Buddha’s image is the same as seeing the Buddha’s relatives. Therefore, Buddha statues are also popular all over the world. 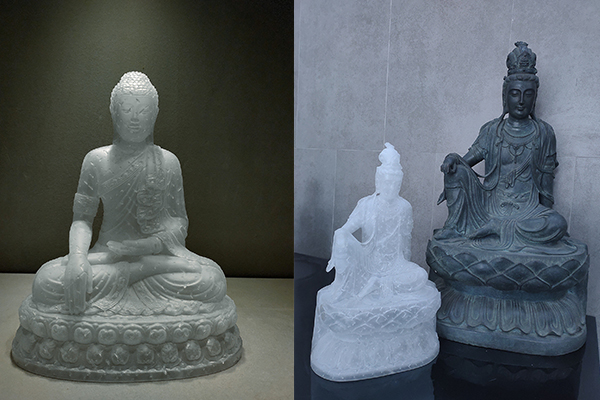 According to the different materials, they are generally divided into copper Buddha, Golden Buddha, stone Buddha, jade Buddha, glass fiber reinforced plastic Buddha, resin Buddha, unborn Buddha and wood Buddha. Among them, bronze Buddha statues are popular because they are easy to preserve and have a long time to preserve.
Copper Buddha statues are mainly made by forging and casting. Among them, there are more welding points for the Buddha statues produced by forging technology. Due to the influence of environment, it is necessary to pay attention to the later maintenance. However, the surface details of the lost wax casting Buddha statues are seriously lost and deformed, and there are still cracks at the mold closing line, which will cause more distortion for the digital model to become a real object.

Using the quick casting process, the wax pattern is directly printed by 3D printing. The surface of the wax pattern is smooth, the details are exquisite and the appearance is lifelike.
Then the wax pattern is directly made into shell and molded, and the Buddha statue is cast. Using the rapid casting process, the surface quality of the Buddha statue is smooth, and the wall thickness is very uniform. All the details can be cast directly, and the degree of reduction with 3D data is very high.
With the help of the later art processing, we can get beautiful, exquisite and detailed Buddhist works.